Why Every Mystery Lover Should Watch Knives Out?

A beautifully written and directed Knives Out Hollywood movie has become the new favorite of most mystery buffs. While Daniel Craig, Chris Evans, and Jamie Lee Curtis in the trailers garnered huge attention Rian Johnson’s screenplay and direction have really taken this murder mystery top the notch. On every turn of the film, you will be left guessing what’s going to happen next.

If that didn’t inspire you enough to watch this movie, we have got the stellar reasons why every mystery buff should watch Knives Out full movie.

Every mystery buff looks for a movie that will turn them completely upside down. Knives Out leave no chance to keep you stunned by every mysterious turn in the film. It’s when you are sure of yourself the story and the characters’ performances will throw you in the ringer until the very last moment. 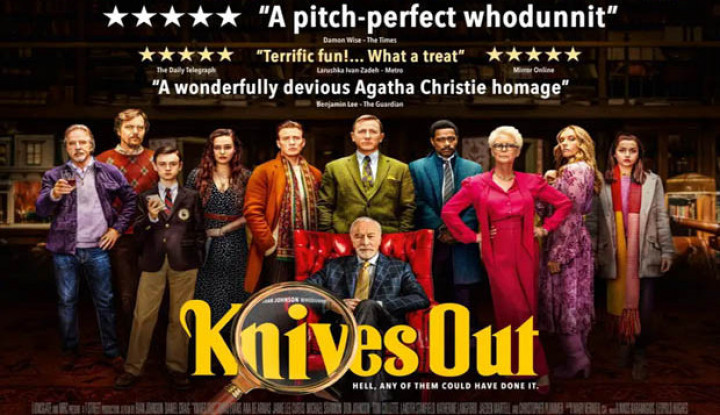 Rian Johnson has beautifully written the screenplay. The story on the screen captivates your attention and makes the audience question their perception about the characters and the story itself. Johnson kicks off the film with the murder of a famous crime novelist. Following the murder enter the cops and detectives in the house and as happens in every movie or even real-life every family member and the servant is on the radar. Well, at this point while you sit smugly thinking that you have seen enough mysteries and you can guess what’s going to happen next, Johnson comes in with his third act and turns the story and your perception upside down. As he has done previously with Looper, Brick, and the Star Wars: The Last Jedi, Johnson again proves with Knives Out why he is master of the third act.

The movie feels operatic right from the first scene. When we see two dogs running towards us in slow motion with an old mansion in the background, we get the idea of what kind of the house it would be – a huge mansion with enough space but still feels claustrophobic. For an over-comedic movie in some scenes, Knives Out doesn’t portray any scene which may seem unrealistic in a murder mystery.

For a film whose star cast reads Daniel Craig, Jamie Lee Curtis, and Chris Evans you can expect nothing else than magnetic performances. While every single significant character in the movie has done a great job, some of the scenes especially the conversation scenes between the detectives and the Thrombeys exceed your expectations.

With the strong star cast, sharply written and directed story, Rian Johnson’s Knives Out happens to be the healthy addition to the list of prominent Hollywood thriller films. Watch Knives Out movie online today and feel the grip of the movie yourself.